INTERESTED IN PLAYING OR COACHING IN EUROPE? LOGIN or REGISTER NOW FOR FREE!
Posted on 15 Sep 2014 - Go back to news list


This article is provided in partnership with American Football International
(http://www.americanfootballinternational.com/helsinki-roosters-repeat-defeat-turku-trojans-21-7-in-maple-bowl-xxxv/)

The Helsinki Roosters ended a long, tough season in the best possible way by defeating the Turku Trojans 21-7 in Maple Bowl XXXV.

Roosters captains Matias Sarvela, Julius Majander, Sampo Rantaa and Miikka Lievonen were able to lift the Maple Bowl Trophy in Helsinki's Sonera Stadium on Saturday evening for the second year in a row. 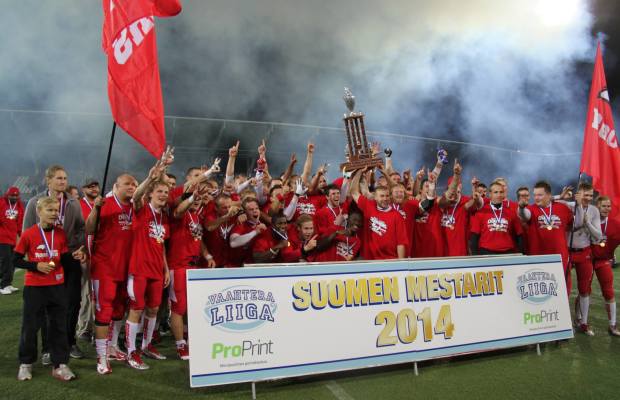 The Roosters dominance of the line of scrimmage was key to the thrilling victory in Maple Bowl XXXV. The Roosters entire offensive line; Iiro Luoto, Aleksi Kriivarinmäki, Mikko Toiminen, Jere Lahti and Akseli Kaasalainen were selected as the team's MVPs. The Maple Bowl MVP Jaycen Taylor was unstoppable on this day, rushing for a total of 137 yards on 15 carries (one touchdown) while catching seven passes for 68 yards. After the game he gave full credit to his offensive line.

For the Roosters, who had suffered through innumerable injuries throughout the regular season, defending their title was a special accomplishment.

Helsinki scored first as quarterback, Sean Shelton, enjoying a great day throwing, found Julius Majander in double coverage. Majander made a terrific catch and battled his way into the end zone to give the Roosters a first quarter 7-0 lead. Shelton and Spears dominated the first half with Spears finding holes and Shelton finding Spears on screens. The Trojan defense did not seem to have an answer for #11 and #14. 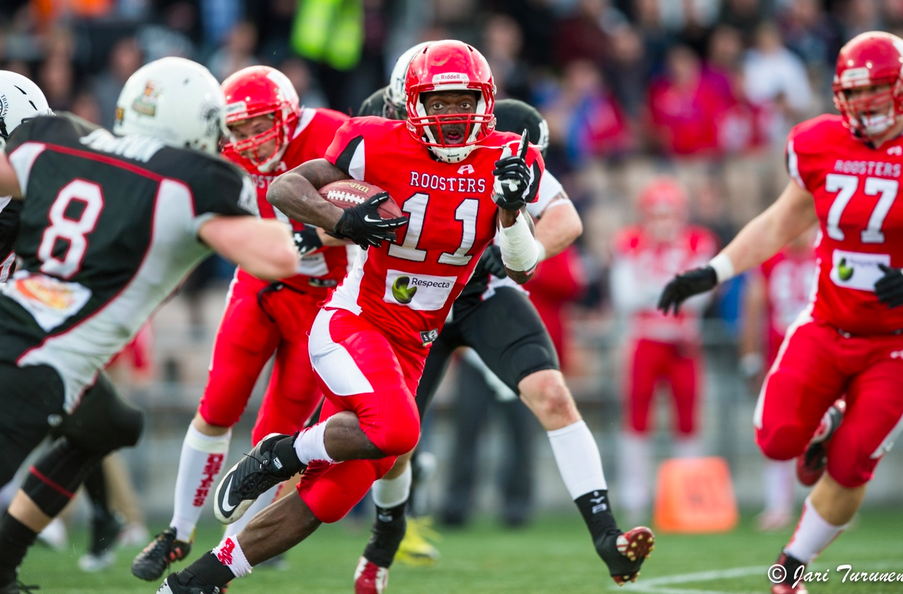 The Trojans committed two turnovers in Rooster territory which cost them dearly as both Crawford and quarterback Jonny West fumbled the ball. The score remained 7-0 at the half, but game MVP Jaycen Taylor was not finished. Early in the third, Taylor found a seam over left guard after a Trojan drive petered out at the Roosters nine yard line. He scampered 60 yards to extend the Rooster lead to 14-0. Offensive coordinator Atte Kniivilä's take-what-they-give-us scheme was working to perfection. Shelton managed the game and with Taylor's running, it was tough for the Trojans’ offense to get on the field.

Later in the fourth, Shelton found Ville Roitto on a screen and he made no mistake taking it 24 yards into the end zone giving Helsinki an almost insurmountable 21-0 lead.

Meanwhile, Turku's bruising running back Jocques Crawford was more or less kept in check in the first half, although he still managed to gain 88 yards rushing. However he was forced to leave the game before the break due to a leg injury. The absence of Crawford, forced Turku quarterback Jonny West to go to the air. West complied and with nine minutes left in the game, engineered an 11 play 71 yard drive, culminating in a West to receiver William Lahti six yard touchdown pass to bring the Trojans to within 21-7.

From then on, the Roosters maintained ball control, turning it over once on downs but regaining it to finally take a knee and put their 17th Maple Bowl win into the record books.

Standouts for Helsinki were Shelton and Spears while on defense Aarno Sjöblom, who was playing in his sixth Maple Bowl, led a tough-as-nails Rooster squad, allowing the Trojans only 99 yards passing and 243 yards in total. Helsinki on the other hand, accumulated 437 yards of total offense. 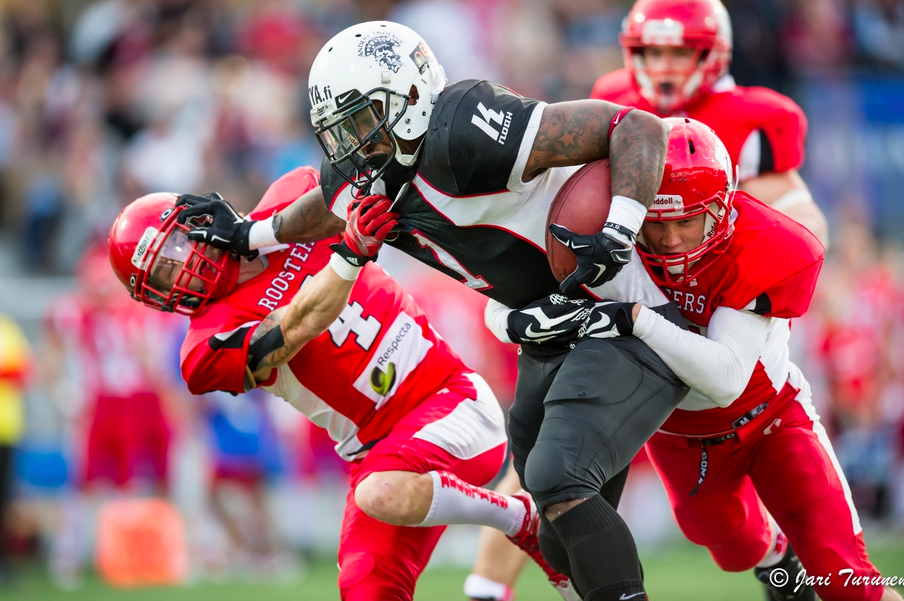 Roosters head coach Juha Hakala was happy with his team: "This was a game worthy of the finals. Turku has had an incredible season. Every time we have played them this year the game was close. All honor to them. I’m proud of my team. Despite all the injuries, players and coaches alike never lost focus and found ways to overcome adversity and win games."

The Maple Bowl victory capped an outstanding season for the Roosters which saw them also win the IFAF Europe Champions League. They defeated the champions of both Denmark and Sweden to get to the playoffs before facing Serbian champions Belgrade Vukovi in a game which went right down to the wire. They only lost one game all season and survived the loss of all star quarterback Robert Johnson to capture two European titles.

Your article is not accurate. Jocques Crawford was not forced to leave the game with a leg injury. He was thrown out of the game for unsportmanlike conduct.
Go back to news list
Register now!
My Messages
Sent Messages
Who saw my profile?
My Profile
My Account
My Notes
My Contacts
My Block List