INTERESTED IN PLAYING OR COACHING IN EUROPE? LOGIN or REGISTER NOW FOR FREE!
Posted on 03 Dec 2011 - Go back to news list 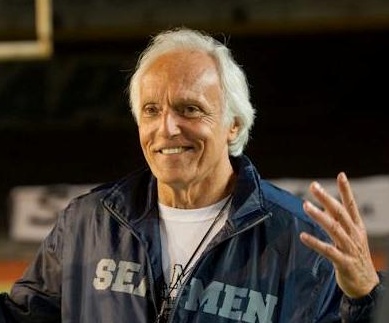 
Avezzano, who played at Florida State University in the mid 1960s, has enjoyed an outstanding coaching career both at the college and NFL level. With the Dallas Cowboys he helped the team win three Super Bowls (1993, 1994, 1996). He was honored by his coaching peers in 1990 when, as the special teams coach for the Cowboys, he was named Special Teams Coach of the Year.

Avezzano won his second NFL Special Teams Coach of the Year award in 1993 when his units helped the Cowboys finish as the only team in the NFL to rank in the Top 10 in the league in all four major kicking game categories.

In 1998, the Cowboys were one of only two teams in the NFL to be ranked in the top 12 in all four major kicking game categories, including leading the league in kickoff coverage (18.5), earning Avezzano his third Special Teams Coach of the Year award.

In 2003, Joe joined the Oakland Raiders and coached their special teams for three seasons.

He earned his first head coaching job at Oregon State University in 1980. Avezzano's next job was as offensive line coach at Texas A&M from 1985–1988, during which time the Aggies won three Southwest Conference titles and two Cotton Bowl Classics. He also served as offensive coordinator for Texas A&M in 1988.
Please login to comment.
Posted by Vinnie Miroth 8 years ago
Rest in Peace Joe.
Much Respect
VM
Posted by Chauncey Calhoun 8 years ago
Congrats Coach....its different, but im sure you ll love it, Its joyous, competitive football, played with passion, enjoy your time in Italy
Go back to news list
Register now!
My Messages
Sent Messages
Who is online? (7)
Who saw my profile?
My Profile
My Account
My Notes
My Contacts
My Block List