INTERESTED IN PLAYING OR COACHING IN EUROPE? LOGIN or REGISTER NOW FOR FREE!
Posted on 11 Jun 2013 - Go back to news list


Having finished my four year college football career (two years M-State Fergus Falls and final two years at the University of Mary in 1991), I received some interest from NFL teams and went to a 3 day mini camp tryout. I did very well but was not offered a contract. The agent I had made contacts with European teams and I was contacted by the AFC Rangers from Vienna, Austria in in the winter of 1992. I mulled over the contract offer and decided it sounded like a great adventure and a chance to play professionally and experience new culture.

I signed with the Rangers in January 1993 The team played in Austrian Football Leagues top level AFL. I was very excited about the whole thing but also wondered what to really expect from all of it. It was all new for a Minnesota boy.

When I arrived to Vienna I saw signs in the airport that said "Wien" which is German for Vienna. I didn't know this. I thought I had flown into the wrong city until I asked if I was in Vienna. That's how little know about Europe when I first arrived. It took some weeks to get fully acclimated to the different food, signs, and culture but I grew quickly to really like the city the culture and most of the food. I lived with three other American imports in a very large and nice apartment that the team rented for us. The other imports were a fullback/running back from the University of Kentucky and two players from the University of Rhode Island. One a QB and the other a strong safety. I myself was a wide receiver and running back in college and ended up playing WR,RB, some DB and returning kicks for the Rangers that season and in the other seasons I spent with the team. My first game in Austria was against the Salzburg Bulls. We won the game and I had a great start with 2 touchdown catches, over 300 all purpose yards and 2 interceptions. Earned my salary in that one. 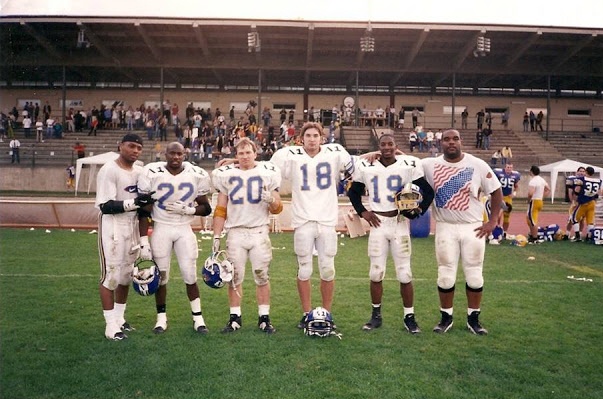 That first season the team finished the regular season 6-2 beating the Vienna Vikings once and the Graz Giants and Salzburg Bulls each twice and the Feldkirch Dinos once. Each of these teams had excellent US import players, and one who had played for the Denver Broncos in the Super Bowl. We were a favorite to reach the Austrian Bowl but lost in the semi finals to the Dinos 42-41. The Dinos would go on to win the Austrian Bowl. My first season was very enjoyable and the football was much better than anticipated, comparable to small college level D2/D3 in the US and strengthened by the Imports. Although some things were different and still are with practice and all it still is football. The players on our team were dedicated and worked hard at the game while balancing there daily lives with it. We as Imports spent our days working out at the gym, sightseeing and just hanging out and having fun. We also did some travelling when there were longer breaks in the schedule. For Imports at least in most of my experiences are treated very well and have a nice lifestyle while playing or coaching in Europe. 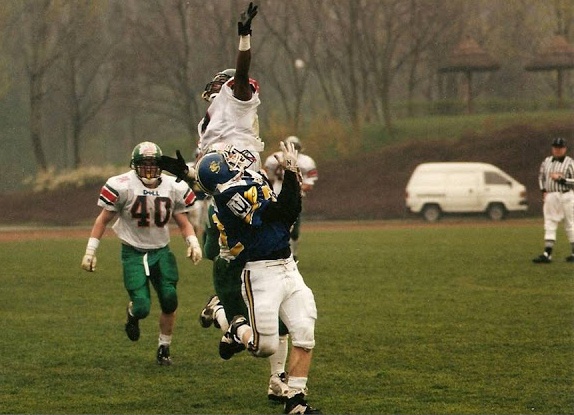 In 1994 I ended up in the US to take care of some personal things with the family and see again if I could land a job with an NFL team which I still felt I had the skills and talent to make with a real opportunity. When nothing worked out and since my first experience in Europe was so good I decided to return to the Rangers in Vienna for the 1995, 1996 and 1997 seasons. Each year after the season I returned to the US and coached and looked forward to returning the next season. Each year seemed to be more enjoyable as I got more and more comfortable with the team and Europe. So I came to really love Europe and playing football in Europe.

The 1995 season the Rangers were coming off a bad previous season in which they won only 2 games and had spent a lot of money on Imports and a coach without good results. For 1995 season the team could afford only two imports, myself and Brad Strohm who had played QB for LSU Tigers and at Mississippi College. We worked well together and ended up surprising many teams in the even stronger Austrian Football League with our teams strong play. We finished the season 4-4 with a few of the losses very close games. The Rangers schedule included some of the best teams in Europe Vienna Vikings, Graz Giants and Klosterneuburg Mercenaries (who are now called the Dragons).

I had a memorable season as I was honored as the league's MVP and set the season touchdown scoring record with 20 (which broke the record that Anthony Thompson former Denver Bronco and Heisman Trophy candidate had set in 1993 with the Bulls). Thompson played the 1995 season with the Mercenaries who we beat twice in this season. It was also a special season as my mother got to come to Austria and also see a game against our rival and top team Vienna Vikings. I scored five touchdowns against the strong vikings defense. The Rangers team lost in the playoff semi final again this time to the Graz Giants who were led by US import QB Matt Sayre and University of Iowa import player Paul Kujawa in a close game 37-29 in Graz. The Giants went on to win the 1995 Austrian Bowl championship beating the Vikings. The Rangers that season played very good football against good top level teams in the Austrian League and landed a good new sponsor, A1 Telecom for the next season. 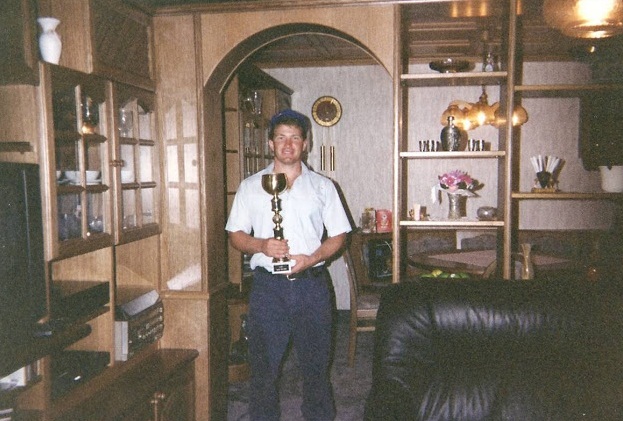 The 1996 and 1997 seasons were up and down on the field for the team. We played the 1996 season in the AFL and also participated in the Eurobowl tournament playoffs and lost in our group to the Graz Giants 17-12. Our participation was based on our good success from the previous season. In 1997 the team had several good US import players as for sometime there was not a limit on US players in the league. All the AFL teams it seemed, had a lot of imports and in the 90's the imports were of very high quality. The Rangers lost once again in the 1997 AFL semi finals to Graz after holding a halftime lead. For me the 1996, 1997 seasons were again exciting and fun and I again had very productive seasons on the field.

The relationships I developed with the team, players, fans, and Vienna made the country and Vienna seem like my second home and the team a second family. Off the field it was during this time that I became a father for the first time and in the off season in the US I decided to stop playing. I even gave my daughter (2nd child) the middle name Vienna.

I knew I still could play at a high import level and wanted to continue. Even so I worked as a coach in the US and was a substitute teacher until 2000 when I decided to get in shape, break out the cleats and play again. I signed on with the Rangers who had also signed a coach from Minnesota Jim Roforth that I knew and had coached with in the US. I had played in 1999 for a team in Minnesota called the St. Paul Pigs(we went undefeated) in a kind of preparation for the comeback 2000 season in Austria. The 2000 season was not as successful for the Rangers team as all had hoped and we won just three games, missing the playoffs. I played well in my return scoring twice each against Vienna Vikings and Tyrolean Raiders and once in each of the other games played.

After that I was a coach in the US for some years and had some good success winning a couple championships. Then in 2008 I had that itch to play again and the opportunity arose to play and help coach for the Vienna Knights for the second half of 2008 season in Austria. The pull to play again was too much and I just had to do it. Getting into playing shape proved to be very hard. I played fairly well although not real healthy and considering I had not played for some years. I noticed in 2008 and now again in 2013 as a coach for the Rangers from watching league game videos and games live that the media is more involved than in the past and the teams did a better job of presentation of the game. Like pregame introductions and those kinds of things. The Internet has been good for teams to build help with advertising and fans. The level of football in Austria on the field in my opinion seems to be similar to in the 90's. I remember all the great imports through the seasons but also so many very good Austrian and European players too. Good high level football then and now in the AFL in Austria. I think people not involved with football in Europe would be surprised at how good the football is in Europe.

I also spent two seasons in Switzerland 2009, 2010 as a player and coach for the Bern Grizzlies and Thun Tigers. The level of football is not quite as good in Swiss League but I sure did like the country and people there. That is one beautiful country. We had some success on the field reaching the semi final with a Swiss QB named Marcel Niklaus. If you play long enough you get injured and I did completely tearing my Achilles tendon in a game against the Calanda Broncos. The doctors in Switzerland did a great job fixing me up. So just to prove I could do it or maybe cause I am somewhat crazy I decided to play again in 2010. It was lots of hard work. The season was pretty successful for me and the team in Thun. The team had its best season in many years at 6-2.

In 2011 I ended my playing career and coached the Terni Steelers in Italy for three months. This was an eager team that really worked hard to learned and improve. Italy itself was interesting to see the history and live there. The people treated me extremely well and the wine and food was great. The team was preparing for its first season in the Italian league and was very receptive and had some good athletes.

Now currently in 2013 I have come full circle and I am back in Vienna, Austria and somehow ended up now with the AFC Rangers as defensive coordinator. The Rangers after sometime in the lower divisions are back in the top league AFL. They are a younger team and are struggling right now but I think they could have a bright future and successes in the AFL again.

It is great to be back to where this whole thing in Europe started for me. I have a lot of great memories and made so many friends and been to so many great places over here. Not too much has really changed, football is football wherever you are.

Thank you for letting me share my experiences. I wish for football to continue to thrive in Europe and worldwide.