INTERESTED IN PLAYING OR COACHING IN EUROPE? LOGIN or REGISTER NOW FOR FREE!
Posted on 05 Nov 2013 - Go back to news list 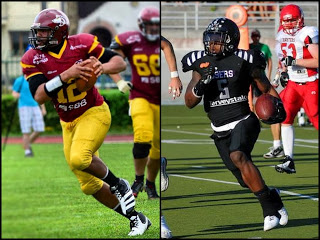 
After meeting and working under TDEU wing, Lance Kriesien and Charles McCrea became a match made in heaven, and Gdynia Seahawks recognized that by signing both to their team.

McCrea is excited about the signing - "After 4 years in Finland and 1 in Austria, it was time for a change. Poland is definitely the place to be, especially if you're an American football player who wants to educate and spread the love for the game we all love. I was a part of Team Europe at Euro-American Challenge, and seeing first hand the hype about football in Poland, and fans, especially Seahawks fans... It was love at first sight."

We know for a fact that McCrea is one of the highest payed imports in Europe, so we were wondering why Poland. However, McCrea told us that salary wasn't an issue, and that he was more than happy to take a salary cut, because in his own words "I'm about to be a part of something really special. Seahawks head coach went a step further, and made me feel more than comfortable on signing with his team. As soon as I signed, my future teammates showed love within minutes."

Kriesien is also excited, and it is a surprise that he is leaving Serbia. Kriesien spent 2 years playing and coaching for the Belgrade Vukovi, and was also on the coaching staff of Serbian National Team for 2 years.

"I am extremely excited about the opportunities the Gdynia Seahawks present. I have had discussions with the club over the years and have watched the program blossom into a legitimate power in Poland and Eastern Europe. I look forward to building on that foundation and elevating the program to be recognized around all of Europe on any level as a respected team.

I love Serbia and my time with Belgrade Vukovi. That club will forever be in my heart as I have built great connections with the administration, staff, players, fans, and city over the last 2 years. After much deliberation and prayer, I've decided that it was time for a new challenge. I have accomplished every athletic and personal goal I have set for myself there and after an undefeated season I'm going to move on to a different situation. I have no doubt Vukovi will continue the standard of success that has been synonymous with the club for the last decade. Belgrade will always be a second home.

The Polish league has caught my eye over the years along with the rest of Europe. The same qualities that drew me to Serbia 2 seasons ago have presented themselves in Poland now. The country is hungry for the sport and is getting more and more support each year. The Gdynia Seahawks are a quality organization that do things the right way. They have a very talented core of domestic players, experienced coaches, and elite imports. When the opportunity for Charles and I to play on the same team came about, we jumped at the bit. It made the decision to call Poland home that much easier. Everyone in the organization has the same goal - to be recognized as champions. Thats the type of team I want to be associated with and look forward to accomplishing those goals with them in 2014.

We have a difficult road ahead, but we are more than excited about conquering each challenge week by week. By July, the Gdynia Seahawks will be one of the top teams in Poland and in Europe." says Kriesien.

Source: http://www.touchdown-europe.net/2013/11/breaking-news-mccrea-kriesien-sign-in.html
Please login to comment.
Go back to news list
Register now!
My Messages
Sent Messages
Who is online? (8)
Who saw my profile?
My Profile
My Account
My Notes
My Contacts
My Block List